Research activities among UF College of Medicine – Jacksonville faculty are off to a strong start in 2017. There have been several grant submissions to the National Institutes of Health, Department of Defense and other federal agencies, along with a number of research proposals submitted to foundations and associations. Funding of industry-sponsored agreements is continuing at a steady pace, with many new confidentiality disclosure agreements from new sponsors being executed.

We are using UFIRST, a fully functional electronic system, for all Division of Sponsored Programs, or DSP, and Institutional Review Board, or IRB, activities in Jacksonville. In July 2016, DSP UFIRST implemented the award module to process all awards and amendments in the electronic system. This award phase complements the earlier implementation of the proposal and agreements phase, enabling UFIRST to administer grants and contracts electronically from proposal stage through negotiation to final award. The Contract and Grant Office is also integrated into UFIRST for a more effective and efficient administration of sponsored programs at UF.

In late 2016, the Jacksonville IRB (IRB03) fully implemented the electronic system myIRB for all IRB submissions for review. IRB03 had been previously using myIRB for expedited submissions (and other select submissions) on a voluntary basis. It is now mandated that all IRB submissions, reviews and approvals be administered through the electronic system. IRB03 worked closely with Gainesville to submit an extremely comprehensive accreditation application to the Association for the Accreditation of Human Research Protection Program, or AAHRPP, in December. AAHRPP accreditation is considered the “gold seal” to assure research participants, researchers, sponsors, government regulators and the general public that UF’s human subjects research program is of the highest quality and promotes excellent and ethically sound research.

The first two quarters of fiscal year 2017 were productive and rewarding for a number of researchers. For the second time, Dr. Dominick Angiolillo, a professor of medicine and director of cardiovascular research, was named one of the “World’s Most Influential Scientific Minds.” This list of researchers is compiled by Thomas Reuters and recognizes scientists with the highest number of articles most frequently cited by fellow researchers. Those on the list are considered to have the greatest influence in their respective fields.

Dr. Angiolillo and his research team are participating in a federally sponsored study investigating genetic testing that can significantly reduce the risks of cardiovascular events by potentially identifying more-effective medication. This research study is performed in collaboration with the UF Personalized Medicine Program in Gainesville.

Dr. Faheem Guirgis, an assistant professor of emergency medicine, was granted a Career Development Award (K23) from the NIH for his project on dysfunctional HDL in sepsis. This was the first K23 awarded to a COMJ faculty member. Dr. Guirgis will perform his project with researchers on the Jacksonville and Gainesville campuses.

Faculty have been asked to join leading-edge national research networks in the areas of pulmonary disease, neurological disorders, pediatric medicine and trauma, to name a few. We have partnered with several prestigious research institutions to develop novel programs in an effort to acquire federal and non-federal sponsored funding. Our faculty continue to serve an important role in our communities, engaging in research that promotes a better quality of life.

With the arrival of Dr. Leon Haley, our new college dean, we continue with our goal to enhance campus research endeavors, develop areas of research strength and build a strong research infrastructure. We will reconvene the Research Advisory Council to make recommendations and strategize for next steps. The search committee will also reconvene to open the search for a senior associate dean for research.

UF Health Science Center Jacksonville Research Day is May 18. We will provide details on the agenda soon. 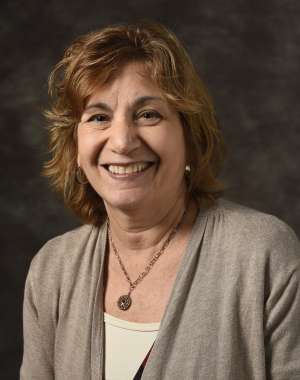 Tina Bottini, M.P.A., is senior assistant dean for research administration for the University of Florida College of Medicine – Jacksonville.

Bottini joined UF in 2001 as director of research and program development for the Neuroscience Institute. In 2006, she was appointed director of the college’s Office of Research Affairs, and in 2010 was promoted to assistant dean.

Bottini holds a master’s of public administration from Suffolk University in Boston.